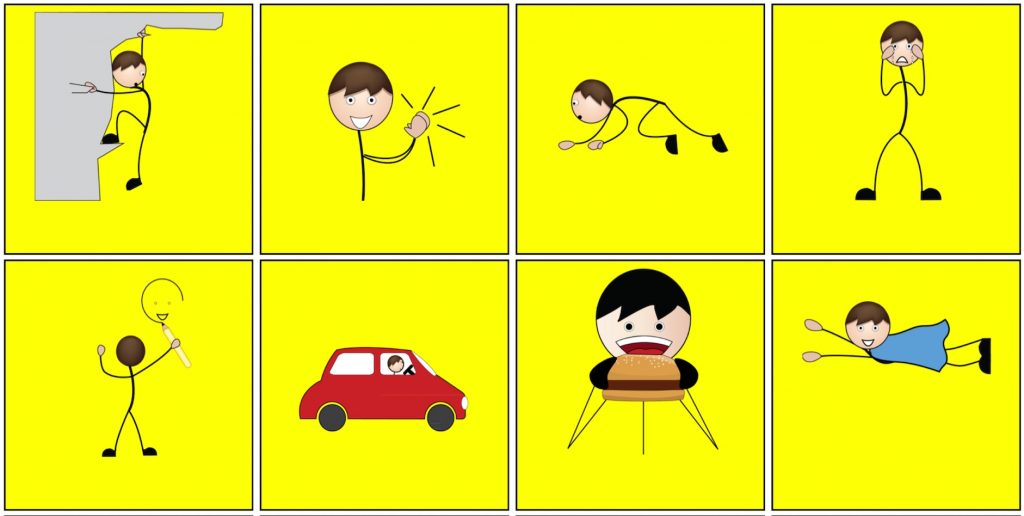 Does your child have trouble using the right verb tense?

I ‘spinned’ around (spun)

He is play (playing)

I spilled it (split)

I leaved it there (left)

Verbs are the essential ingredient in any communication. Verbs tell us ‘what’s going on’ in a sentence.

Verbs are a big part of communication and add so much meaning to our sentences. Like much of english grammar, verbs in all their forms are complicated.

So let’s learn a bit more about verbs and find out how to help our kids use the right verb tense.

They often give a more precise sense of time, show obligation or possibility such as

“They were watching TV”

Modal verbs often give a sense possibility or necessity such as:

“You must clean your room”

Regular verbs can be predicted with rules and appear in 4 forms:

Different verb forms can be used to indicate tense. When 2 verb forms are combined this can also change the tense.

“He will run” “He was running”

In order to avoid getting too technical we’ll stop there but once a verb is added into a sentence there are many other types of verbs created. For example suffixes can be added to words in order to form a verb such as -ate (orchestrate), -en (quicken) -fy (simplify), -ise (hospitalise).

So that’s a lot of verbs and rules for our little ones to learn.

Here’s a bit of a guide outlining when we can expect these verbs to appear in your child’s vocabulary:

According to “Browns Stages” verbs are acquired as follows:


How to teach your child verbs

So now that we have covered all these different verb types and determined which ones your child should be using we’ll share our tips.

Here is an example of the target word “went”:

Child: “I goed to school today”

Parent: “Oh you went to school today,” “I went to work” “where else did you go today?”

Child: “I goed to the shops with Dad”

Here we can see the parent has modelled the target verb 6 times within a 1 minute conversation. It takes some getting used to but once you get the hang of  this strategy it is easy to work into your day.

Play an action game by giving the instruction “walking, walking, walking” “STOP, what did you do?” (Your child has to freeze and say what he/she did “I walked”).

Look through books, magazines, or catalogues, or search for action pictures on the Internet. Take turns talking about the picture with your child as if it happened yesterday. “Yesterday he jumped”

Play action games where you do the action and then talk about what you did. For example:

Use the toy to act out verbs for the child to copy e.g. Barbie is sleeping, now it’s your turn.